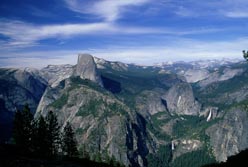 in the Sierra Nevada, which was set aside as a national park in 1890. The park harbors a grand collection of waterfalls, meadows, and forests that include groves of giant sequoias, the world's largest living things.

Highlights of the park include Yosemite Valley, and its high cliffs and waterfalls;
Wawona's history center and historic hotel; the Mariposa Grove, which contains
hundreds of ancient giant sequoias; Glacier Point's (summer-fall) spectacular
view of Yosemite Valley and the high country; Tuolumne Meadows
(summer-fall), a large subalpine meadow surrounded by mountain peaks;
and Hetch Hetchy, a reservoir in a valley considered a twin of Yosemite Valley.

The Tioga, Glacier Point, and Mariposa Grove roads are closed from October/November through May/June due to snow (the Mariposa Grove Road may be closed for a shorter period). All other parks roads generally remain open all year, though chains are frequently required. Some hotels and campgrounds in Yosemite Valley and Wawona, and the Valley Visitor Center are open all year.

How to Get to Yosemite National Park

Tioga Pass entrance on Highway 120 east from Lee Vining and Highway 395. The Tioga Pass entrance is closed from the first major snowstorm in November until late May to June due to snow. All other park entrances are kept open all year, but may require tire chains because of snow anytime between November and April.

Weather & Climate
Weather can change rapidly during all seasons of the year. Elevation plays a major role in temperature and precipitation. Yosemite receives most of its precipitation in the months of January, February and March. Summers are typically warm and dry. Spring and fall are transitional months, when warm, sunny days can suddenly become stormy. Clouds can build up during the summer to produce spectacular thunderstorm activity.

For Yosemite Valley and Wawona (subtract 10-20 degrees for Tuolumne Meadows), AVERAGE weather is as follows:
Summer: Typically dry, with occasional thunderstorms; highs in the low 90s, lows in the 50s.
Fall & Spring: Highly variable, with typical high temperatures ranging from the 50s to 70s, with lows in the 30s. Rain is less likely early in fall/late in spring and rain or snow is likely late in fall/early in spring.
Winter: Snowy, rainy, or (sometimes) even sunny days are possible, with highs ranging from the 30s to 50s and lows in the upper 20s.

Accessibility
Most visitor centers, gift shops, and hotels are accessible.

Camping at Yosemite National Park
Spots are sparse most of the year and reservations are highly recommended. It is also imperative you follow camping in bear country rules and regulations, because as they say "A fed bear is a dead bear". And its not good when all the bears are dead some day. Reservations can be made here.

Climbing
Yosemite is one of the world's greatest climbing areas. Climbers here can enjoy an endless variety of challenges- from the sustained crack climbs of the Merced river canyon to pinching crystals on sun drenched Tuolumne domes to multi-day aid climbs on the big walls of the Valley. Yosemite is not just a climber's playground, however- Its walls and crags are an integral part of a larger ecosystem, protected as wilderness, that was set aside for people to enjoy in a natural state for generations to come.

As the number of climbers visiting the park has increased through the years, the impacts of climbing have become much more obvious. Some of those impacts include: soil compaction, erosion, and vegetation loss in parking areas, at the base of climbs, and on approach and descent trails, destruction of cliffside vegetation and lichen, disturbance of cliff-dwelling animals, litter, water pollution from improper human waste disposal, and the visual blight of chalk marks, pin scars, bolts, rappel slings, and fixed ropes. Many of these impacts can be eliminated or greatly reduced by following the minimum impact practices outlined in the conservation guidelines offered on this page. The impacts of your actions may seem insignificant, but when multiplied by the thousands of people who climb here every year they can have a significant, long lasting affect.


Copyright 2009: USParkinfo.com. All information on this website is deemed accurate. We are not responsible for any changes to the information. For more information, please contact us

Yosemite Info:
Basic Information
Where to Stay
Activities
Nearby Cities